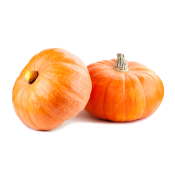 Nutrional and other info from Wikipedia A pumpkin is a gourd-like squash great for holiday pies and typically used for decorating during Halloween.

When ripe, the pumpkin can be boiled, baked, steamed, or roasted. In its native North America, it is a very important, traditional part of the autumn harvest, eaten mashed[19] and making its way into soups and purees. jjOften, it is made into pie, various kinds of which are a traditional staple of the Canadian and American Thanksgiving holiday. In Mexico and the U.S., the seeds are often roasted and eaten as a snack.
Pumpkins that are still small and green may be eaten in the same way as squash or zucchini. In the Middle East, pumpkin is used for sweet dishes; a well-known sweet delicacy is called Halawa Yaqtin. In South Asian countries such as India, pumpkin is cooked with butter, sugar, and spices in a dish called kadu ka halwa. Pumpkin is used to make sambar in Udupi cuisine. In Guangxi province, China, the leaves of the pumpkin plant are consumed as a cooked vegetable or in soups. In Australia and New Zealand, pumpkin is often roasted in conjunction with other vegetables. In Japan, small pumpkins are served in savory dishes, including tempura. In Myanmar, pumpkins are used in both cooking and desserts (candied). The seeds are a popular sunflower seed substitute. In Thailand, small pumpkins are steamed with custard inside and served as a dessert. In Italy it can be used with cheeses as a savory stuffing for ravioli. Also, pumpkin can be used to flavor both alcoholic and nonalcoholic beverages.

Give us a call!